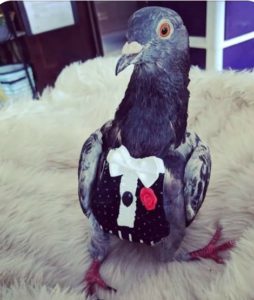 Jonah Pidge was brought to my husband and I late on a Saturday night severely emaciated, crusted with grit and other such city dirt, and so weak that he was laying on his side and couldn’t hold his head up on his own. He had extensive cuts and scrapes along both legs and his underside, which later made sense when we realized he likely had been attempting to drag himself around on the rough city surfaces. We focused first on simply stabilizing Jonah Pidge, and after a few days of care (tube feeding, antibiotics, baths, cleaning and dressing the wounds) he regained his strength at a remarkable rate and had begun eating on his own, but both legs remained limp and unresponsive. A trip to the avian vet confirmed that he was most likely suffering neurological trauma along with the additional challenge of two old, badly healed and fused fractures in his left leg that caused his left leg to stick out at nearly a right angle from his body. 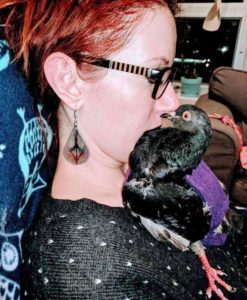 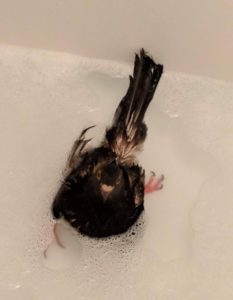 We ventured hopefully down the road of several weeks of Jonah Pidge resting in a towel doughnut to keep pressure off of his legs and underside, and twice daily hydrotherapy in the hopes he might regain mobility. Because he was a wild/feral city pigeon before his injury I worried the change to home life would be too hard for him, but pigeons never cease to amaze me with their adaptive poise… Such joy the first day Jonah Pidge felt both strong enough and at home enough in his “nest” to give me a solid Wing Fu slap! 🙂 Even more amazing was when he started to respond to being gently held and petted with contented coos! I wanted to make sure he had as much mental stimulation and enrichment as possible despite his lack of mobility, and fortunately I work from home so Jonah Pidge and I soon fell into a habit of my either carrying him around the house wherever I went or rolling him with me from room to room as he rode regally in his towel doughnut on a rolling desk chair! 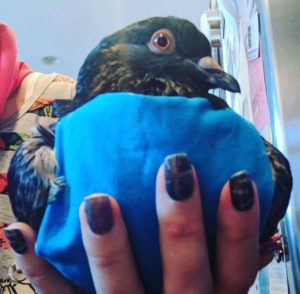 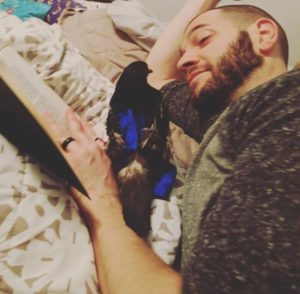 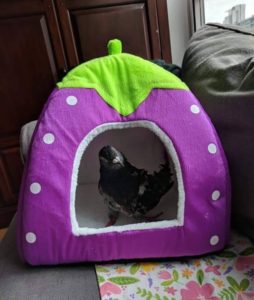 While my husband and I have had the honor of meeting dozens of pigeons thus far in our rehab journey, after a time they either passed away (birds need hospice care too!) or fortunately more often recovered and were able to be released (in the case of wild pigeons only) or adopted (in the case of domestic pigeons or non-releasable injured wild pigeons). At some point during the course of Jonah’s care we realized he would always be a special needs Pidge, certainly unable to fend for himself properly back in the wild, and thus the first permanent pigeon member of our family had found us. It is truly an honor and privilege to be his human “flock” and watch him flourish, regain weight, regrow his missing feathers, and confidently hop on my hand or into my lap for snuggles.

I’m beyond thrilled to be able to report he’s gained full mobility in both of his legs! His left leg will likely always have some limitations, but the avian vet concluded it doesn’t seem to cause him pain and thus advised against the risks of surgery, so we are continuing to work on his physical therapy and strengthening, and with classic pigeon poise he has adapted remarkably well to a life of fluffy blankets and stuffed animals, snuggles, and having full reign over the house. 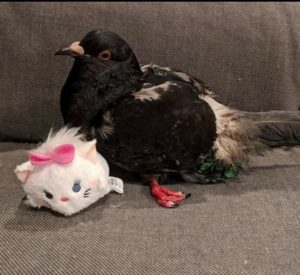 A couple of notes about Jonah’s photos, in case viewers might be concerned:

You can clearly see in many of the photos that Jonah’s left leg is at a very abnormal angle… This is one of the reasons Jonah Pidge remained with us instead of being able to be rehabed and released to resume his life as a wild/feral pidge: our avian vet confirmed that his left leg has suffered multiple injuires in his life, including a fracture that she estimates occurred well before the more recent trauma that temporarily paralyzed him and caused a kind person to spot him and bring him to us for rehab, and as an untreated fracture it “healed” and fused improperly, causing his left leg to stick out at a right angle from the side of his body.

You can also see in some of the photos that some of his feathers are in poor shape, and many of his wing feathers are shorter than normal. This is definitely not because we wanted to “clip” his wings! When he came to us the poor lil one only had 2 tail feathers, his entire underside was so skinned and lacerated that he had no feathers at all where a pigeon should normally have feathers (except for their brood patch area, of course), and his wings kept getting tangled in his immobile legs, damaging his flight feathers, so we temporarily trimmed back some of his wing feathers to prevent further damage. They are starting to grow back in well now, and we are thrilled that he’s doing lots of flapping and starting to be able to take short “hop” flights already!

Chava tried all sorts of avian diapers for Jonah, but he was not comfortable in any of them. She the came across BBB and our Flypers and this is what she said: “With this design there is no having to pull wings through holes and wrestle with an unhappy bird trying to put the outfit on. It has very little fabric on top so it doesn’t hinder movement, smush the tail or other feathers or get in the way of preening (all issues I have had with other diapers I’ve had with other pidgies). He is totally comfortable in his new Flyper and we made him super smart in his Tuxedo outfit because he deserves the best!

Chava loves our Flypers so much that she has agreed to become a USA distributor for discounted shipping. She is currently collecting orders for a bulk order, please feel free to contact her for more information: chavasonnier@gmail.com or private message her on Facebook.